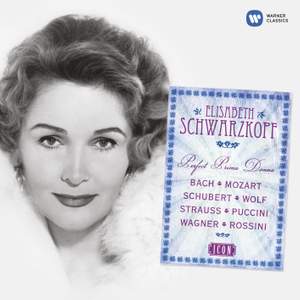 Elisabeth Schwarzkopf (1915–2006) is universally acknowledged to be one of the greatest singers of the 20th century. Blessed with a voice of exquisite beauty, as well as a striking physical presence, she shone brightly in opera, excelled in the concert hall and brought a unique artistry to the recital platform. She was signed exclusively to EMI in 1946 by the recording producer Walter Legge, with whom she formed a dedicated artistic and personal relationship, and together they produced a stream of magnificent recordings over almost 30 years. In addition to the tonal qualities of her voice, Schwarzkopf was renowned for her unrivalled communicative ability, which the vocal critic John Steane described as 'almost making the voice visible'. Thus she could translate her charismatic stage presence into purely vocal terms through the medium of recording, and still convey all the dramatic meaning of her songs and operatic characters to listeners who could hear but not see her. This rare quality is evident in all the recordings in this unique collection, which covers a lifetime of work and reveals the development of her art.

The first CD begins with recordings of works by Bach, Handel and Mozart that are among the earliest that Schwarzkopf made for EMI. They show her voice at its freshest and also exhibit her fine legato and appreciable technique in Baroque music.

CD 2 begins with the famous collaboration between Schwarzkopf and the eminent pianist Walter Gieseking in a collection of simple but refined songs by Mozart that reveal great beauty of tone, evenness of line and sincerity of expression in the singing, as well as sensitive accompaniment from Gieseking. These are followed by four of Mozart’s concert arias with orchestra, in which the conductor is the highly regarded George Szell.

At the beginning of her career, Schwarzkopf sang mainly lighter roles and in CD 3 we have a collection of Mozart arias that demonstrate this part of her repertoire in the arias of Susanna (Le nozze di Figaro) and Pamina (Die Zauberflöte), but also a number of lyric roles that she never sang on stage, including Zerlina (Don Giovanni) and Cherubino (Le nozze di Figaro). This disc also gives us the chance to compare Schwarzkopf’s totally different characterisation of the three principal female roles in Don Giovanni (Elvira, Anna and Zerlina) and Le nozze di Figaro (Susanna, Cherubino and the Countess).

CD 4 brings us back to the field of Lieder and includes another collaboration with a famous pianist, this time Edwin Fischer, in a highly acclaimed recital of Schubert Lieder, as well as more Schubert songs with her two regular accompanists, Gerald Moore and Geoffrey Parsons.

In CD 5 we encounter the widely varied programmes of songs by a wide-ranging selection of composers – from Mendelssohn and Schumann, through Liszt and Brahms, to Mahler and Medtner and many more in between – that would often be a feature of Schwarzkopf’s recitals. To each of these songs she brings her own individuality and stamps them with her personal qualities of beautiful singing and vivid interpretation.

The next disc is devoted entirely to the songs of Hugo Wolf, a composer whom Legge had championed since the beginning of the 1930s. Guided by Legge, Schwarzkopf became a peerless interpreter of Wolf's compositions. This live recording is of a legendary concert in Salzburg on 12 August 1953 marking the 50th anniversary of Hugo Wolf’s death. The piano accompanist is the great conductor Wilhelm Furtwängler.

CD 7 brings us to Richard Strauss, a composer of whose works Schwarzkopf was a matchless performer. It begins with Schwarzkopf’s 1953 recording of Strauss’s valedictory Vier letzte Lieder, followed by the closing scene from Capriccio, an opera that Schwarzkopf performed a number of times on stage, and ends with scenes from Arabella, which Schwarzkopf sang only in the recording studio.

CD 8 stays with Richard Strauss. It starts with a long extract from the first act of Der Rosenkavalier beginning with the aging Marschallin contemplating the passing of the years in a famous monologue and then going to the end of the act in an extended duet with her young lover, the handsome Octavian. This is followed by the glorious trio from the end of the third act, one of Strauss’s most beautiful compositions for the female voice. Then come 12 of Strauss’s wonderful songs for soprano with orchestra, all conducted in supreme Straussian style by George Szell.

The final CD in the set starts with some of Schwarzkopf’s earliest operatic recordings, when she was singing Sophie in Der Rosenkavalier rather than the Marschallin, and a very youthful-sounding Gretel in Hänsel und Gretel. Then come a varied assortment of operatic arias that recall some of the roles that Schwarzkopf sang in the early part of her career, and the disc concludes with four items from the memorable concert at the Royal Festival Hall, London, in February 1967, when Schwarzkopf joined with her two distinguished colleagues Dietrich Fischer- Dieskau and Victoria de los Angeles to pay homage to that doyen of accompanists, Gerald Moore.