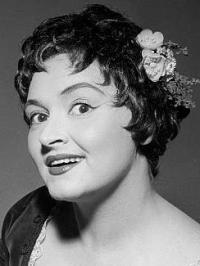 Rita Streich (born 18 December 1920 in Barnaul, Altai Krai, Russia, died 1987) was one of the most significant coloratura sopranos of the post-war period.

Rita Streich moved to Germany with her parents during her childhood, where she grew up bilingual, something that was extremely helpful during her later career. Among her teachers were Willy Domgraf-Fassbaender, Erna Berger, and Maria Ivogün.

Her debut as an opera singer was during the Second World War at the Stadttheater (city theatre) of Ústí nad Labem in Bohemia, in the role of Zerbinetta in Richard Strauss' opera 'Ariadne auf Naxos'. Three years later she secured her first engagement at the Staatsoper Unter den Linden (State Opera) in Berlin, where she stayed until 1952. In that year she moved to Bayreuth, in 1953 to Vienna, and in 1954 to Salzburg. Appearances at La Scala in Milan and at Covent Garden followed.

From 1974 she taught at the Folkwang school in Essen and the Music Academy in Vienna. She gave master classes during the Salzburg Festival from 1983.

Her repertoire included arias from Idomeneo, Così fan tutte, Die Entführung aus dem Serail, Die Zauberflöte, The Marriage of Figaro, Don Giovanni and others. Since she had grown up bilingual, she could also sing the works of Rimsky-Korsakov in their original Russian without a trace of an accent.

Find out more at https://en.wikipedia.org/wiki/Rita_Streich