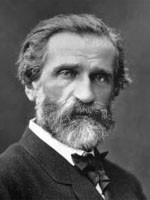 Giuseppe Fortunino Francesco Verdi was an Italian composer best known for his operas. He was born near Busseto to a provincial family of moderate means, receiving a musical education with the help of a local patron. Verdi came to dominate the Italian opera scene after the era of Gioachino Rossini, Gaetano Donizetti, and Vincenzo Bellini, whose works significantly influenced him.

The French baritone is on spine-tingling form in a high-octane programme of arias from operas including La forza del destino, Otello, Don Carlos, and Falstaff.

The charismatic American tenor talks to Katherine about his debut solo recording on Pentatone, centring on two composers who have played a pivotal role in his career to date.

Browse all further reading about Verdi