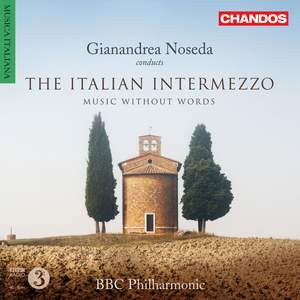 The Italian Intermezzo: Music without words

[Noseda] approaches each item with a relish and stylistic certainty that makes you sit up and listen. The playing, also, is the equivalent of what one might hear in a major opera house, and on... — BBC Music Magazine, March 2011, 4 out of 5 stars More…

Wolf-Ferrari: Jewels of The Madonna: Intermezzo

The intermezzi recorded on this CD are, in the main, orchestral mood-painting interludes found in the great Italian operatic repertoire of the nineteenth and early twentieth century, usually connecting acts in the opera. The music is powerfully atmospheric, designed not only to create the right mood for the ensuing action of the opera, but also providing some respite from the drama itself. The exception is Ponchielli’s famous ballet, Dance of the Hours from La Gioconda, which like most ballets found in operas, gives a break from the drama of the opera and provides the audience a chance to enjoy an entertaining ballet whilst, in this case, listening to some of the catchiest music in the repertoire. Indeed, this scintillating ballet was immortalized in Walt Disney’s film Fantasia and has long been one of the most popular classics in the repertoire.

The rest of the items on this CD range from the very well known and haunting Act III Prelude from La Traviata, to the sparkling items from Wolf-Ferrari’s Jewels of the Madonna and I Quattro Rusteghi, and the richly-romantic intermezzos from the great Verismo composers of Leoncavallo, Puccini, Giordano and Cilea, though the rare items by Catalani are no less enjoyable.

Italian maestro Gianandrea Noseda is in his element in this, his native repertoire. Noseda has made many noted recordings with his BBC Philharmonic orchestra for Chandos, praised for their brilliance of sound as well as their musical excellence. Noseda’s superb musicianship in both the operatic and orchestral repertoire combine on this release to produce one of his very finest recordings. The programme here is unique.

[Noseda] approaches each item with a relish and stylistic certainty that makes you sit up and listen. The playing, also, is the equivalent of what one might hear in a major opera house, and on a good night, too.

This disc is deftly chosen and programmed, from the very well known...to the unusual...The ballet interludes are full of sparkling charm and Puccini provides the most indelible melodic output...The BBC Phil and Noseda play with an effortless sense of style, making the most of the music's variety of colour and sweeping mood changes.

For those of us who woud love going to the opera if only it wasn't for the singing, this disc could be the ideal choice...Noseda and the BBC Philharmonic make alert guides in this repertoire...the playing is well detailed and the performances are convincing. Chandos's record is typically rich and the bass drum should give your speakers a good workout.

it is much more than an hour-and-a-quarter's wallow in slow motion. There are excerpts here from operas one can wait forever to hear on stage....and every one of these tracks is well worth recording in purely musical terms...The performances are suitably vivid and sensitive, always finely controlled and shaped with a masterly hand by Gianendrea Noseda

The playing is idiomatic, infectiously con passione and brio.