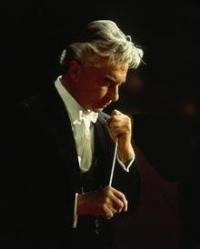 Born in Salzburg, Austria, in 1908, Herbert von Karajan became the city's most famous son after Mozart. Raised in a cultivated musical environment, he studied at the Mozarteum in Salzburg before entering the Vienna Music Academy. He made his conducting debut in 1928 and became chief conductor in Ulm, Germany, before moving on to the larger city of Aachen in 1935, where he was appointed Germany's youngest general music director. He made his debut at the Vienna State Opera in 1937 and at the Berlin State Opera in 1938.

In 1955 Karajan was appointed music director for life of the Berlin Philharmonic, which he honed into arguably the best orchestra in the world. Simultaneously at the helm of the Vienna State Opera, the Salzburg Festival and the Berlin Philharmonic for a time, and closely connected to the Vienna Symphony, London's Philharmonia Orchestra (which had been created especially for him) and Milan's La Scala, Karajan became known as the "General Music Director of Europe" from the 1950s to the 1970s. He towered over European musical life as no one had done before.

Find out more at https://en.wikipedia.org/wiki/Herbert_von_Karajan