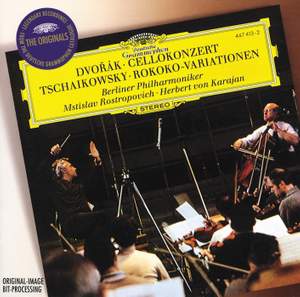 There have been a number of outstanding recordings of the Dvorák Concerto since this DG record was made, but none to match it for the warmth of lyrical feeling, the sheer strength of personality... — Gramophone Classical Music Guide, 2010 More… 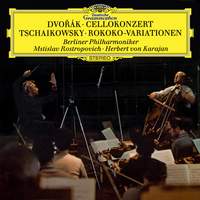 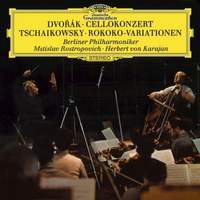 There have been a number of outstanding recordings of the Dvorák Concerto since this DG record was made, but none to match it for the warmth of lyrical feeling, the sheer strength of personality of the cello playing and the distinction of the partnership between Karajan and Rostropovich. Any moments of romantic licence from the latter, who's obviously deeply in love with the music, are set against Karajan's overall grip on the proceedings. The orchestral playing is superb.
You've only to listen to the beautiful introduction of the secondary theme of the first movement by the principal horn to realise that the BPO is going to match its illustrious soloist in eloquence, while Rostropovich's many moments of poetic introspection never for a moment interfere with the sense of a spontaneous forward flow. The recording is as near perfect as any made by DG in that vintage analogue era. It gives the cello a highly realistic presence, and if the passionate fortissimo violins lose just a fraction in fullness, and there seems to be, comparably, just a slight loss of resonance in the bass, the sound picture has an impressively clear and vivid focus.
In the coupled Tchaikovsky Rococo Variations, Rostropovich uses the published score rather than the original version. However, he plays with such masterly Russian fervour and elegance that any criticism is disarmed. The music itself continually demonstrates Tchaikovsky's astonishing lyrical fecundity, as one tune leads to another, all growing organically from the charming 'rococo' theme. The recording is marvellously refined.
The description 'legendary' isn't a whit too strong for a disc of this calibre.

two great musicians performing with complete sympathy for each other: Rostropovich on top form and Karajan an attentive partner

The intensity of lyrical feeling and the spontaneity of the partnership between Karajan and Rostropovich ensures the position of their DG disc at the top of the list of recommendations.