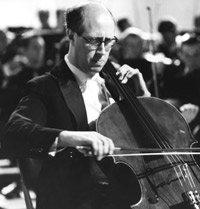 Known throughout the classical music world as Slava - the Russian diminutive meaning "glory" - Mstislav Rostropovich was not only a maestro but also a courageous defender of human rights. He remained loyal to the composers Prokofiev and Shostakovich, when they fell out of favour with the Soviet authorities, and went into exile from the Soviet Union in 1974 after his refusal to dissociate himself from the dissident novelist, Alexander Solzhenitsyn.

Mstislav Rostropovich was regarded as the greatest cellist since Pablo Casals. He was born in 1927 in Baku, by the Caspian Sea, with music in his blood. His mother was a pianist and his father a cellist, pianist and composer. Young Mstislav's ability was evident by the age of five. But when the family moved to Moscow to nurture his talent, they were reduced to begging for a room. With help, they survived, and Rostropovich's musical education continued apace.

He was already composing before he was given some early instruction in conducting, when he accompanied his father to an orchestra rehearsal. But Rostropovich was not always a willing pupil. And when his father died, the pupil became a teacher and the family breadwinner. By now an accomplished pianist and cellist, he took over his father's orchestral and teaching commitments until he and his sister, a violinist, secured places at the Moscow Conservatoire.

There, Mstislav joined Class Number 35 and was taught composition by Dmitri Shostakovich, who became a life-long friend. He dedicated two cello concertos to Rostropovich. From 1956, Rostropovich was a frequent visitor to Britain and formed a bond with Benjamin Britten and the Aldeburgh Festival. On his first appearance there, he accompanied his wife, the acclaimed soprano Galina Vishnevskaya, on piano. But the highlight was when Rostropovich, with Britten at the piano, played the Cello Sonata which Britten had composed specially for him.

It was not just the genius of Rostropovich that earned him universal admiration, but his refusal to be cowed by the Soviet authorities. When Rostropovich demonstrated his support for the Nobel Prize-winning novelist, Alexander Solzhenitsyn, by allowing him to live in his dacha outside Moscow, his defiance proved too much for the authorities. He and his wife were prevented from working abroad and after they were allowed to leave, were shocked in 1978 to learn at their home in Paris that they had been deprived of their Soviet citizenship - two more victims of cultural repression.

But there was a warm welcome in the West, even if artistic merit was reinforced by political considerations. Rostropovich became permanent conductor of the National Symphony Orchestra in Washington. He also performed with the London Philharmonic; and each time he arrived in Aldeburgh, went straight to the cemetery to hug Benjamin Britten's tomb. A bear hug was his normal greeting for his many friends.

He inspired composers to write dozens of major works for him and was himself inspired by events, playing JS Bach in the rubble of the Berlin Wall and rushing to help Boris Yeltsin resist the attempted coup in Moscow in 1991. For his outstanding services to British music, Rostropovich was given an honorary knighthood in 1987.

As a conductor and performer, Rostropovich was flamboyant and individualistic. The music of Tchaikovsky was well-suited to his energy. His emotional power also made his interpretations of Dvorak widely acclaimed. For Mstislav Rostropovich, the cello was an extension of the man.

Find out more at https://en.wikipedia.org/wiki/Mstislav_Rostropovich

The great Soviet and Russian cellist and conductor has died aged 80.