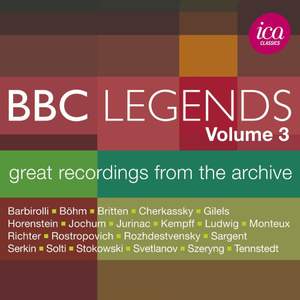 Reger: Variations & Fugue on a Theme of Bach

ICA Classics, via its long-term contract with BBC Worldwide, are proud to release a third volume of the best-selling BBC Legends box, featuring 20 CDs of some of the greatest artists of the 20th century. Volume one was released in 2013 comprising 20 CDs taken from the critically acclaimed BBC Legends catalogue which has been unavailable since 2010. The second volume was released in 2017 and is now out of print. Reviews of the BBC Legends series when it was released in 1998 were outstanding: ‘The high standard of musical performances in these releases is mirrored in their scrupulous documentation and presentation... the engineering and sound of these recordings, despite their ages, is uniformly clear and sympathetic. The result is an unqualified success.’ (Gramophone Magazine)