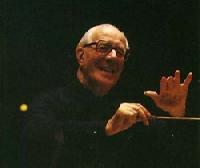 In 1949, Jochum became the principal conductor of the newly established Bavarian Radio Symphony Orchestra, remaining in that office until 1960. He then became principal conductor of the Concertgebouw Orchestra in Amsterdam (1961-64). Apart from his fixed obligations, Jochum conducted in every musical center, above all in Bayreuth (1953-54, 1971) and Salzburg. He died on March 26, 1987, in Munich.

Eugen Jochum, who is considered one of the greatest German conductors of his generation, was influenced by the end of the German Romantic movement and passed this tradition on to his successors. As a great Brucknerian, Jochum was one of the first conductors to overcome strong oppositions and gave audiences what now seems only right.