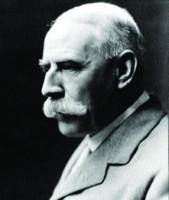 Sir Edward William Elgar, 1st Baronet, was an English composer, many of whose works have entered the British and international classical concert repertoire. Among his best-known compositions are orchestral works including the Enigma Variations, the Pomp and Circumstance Marches, concertos for violin and cello, and two symphonies. He also composed choral works, including The Dream of Gerontius, chamber music and songs. He was appointed Master of the King's Musick in 1924.

Although Elgar is often regarded as a typically English composer, most of his musical influences were not from England but from continental Europe.

The Lithuanian conductor and the City of Birmingham Symphony Orchestra present evocative and dramatic accounts of four works by Elgar, Vaughan Williams, Britten, and Walton.

The French violinist talks to Katherine about recording the Violin Concerto and Sonata with Sir Simon Rattle, the London Symphony Orchestra, and Stephen Hough.

Browse all further reading about Elgar