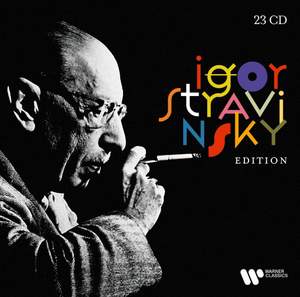 Stravinsky: Scherzo from The Firebird

Does any other composer of the 20th century offer such varied riches? If The Firebird, glowing with the iridescence of his teacher Rimsky-Korsakov, brought him his international breakthrough in 1910, The Rite of Spring sealed his fame and set him on the long path towards the terse archaism of Agon in 1957. Chameleon-like and with tireless creativity, Stravinsky kept pace with the aesthetic evolutions, convolutions and dislocations of his times. In his evocation of the Russia of history and prehistory, in the insolently virtuosic elegance of his pastiches, in his adaptations of Classical myths, in his rediscovery of his faith, and in his late conversion to serialism, he transformed every challenge into an opportunity.

The release of this edition marks 50 years since the death of Igor Stravinsky (1882-1971), the most influential composer of the 20th century.

After he died in New York on 6th April 1971, the New York Times wrote:

“When the history of 20th‐century music comes to be written, Igor Stravinsky will occupy the most prominent position in the period from about 1910 to the beginning of World War II. More than any other composer, he put his mark on an entire generation. He was a shaper, a seminal force, a creator who was the symbol of the musical avant‐garde not only in the public eye but also … in the estimation of his fellow musicians.”

Igor Stravinsky Edition: An authoritative and representative survey of Stravinsky’s music in superlative interpretations by an array of outstanding musicians, including some of today’s leading Erato / Warner Classics artists and Stravinsky himself as historical bonuses

The edition comprises all major works and less frequently heard smaller works. Certain works appear in both their original orchestral versions and in transcriptions, by Stravinsky himself and by other musicians e.g. for solo piano, piano duo, piano and violin, accordion duo.

3CDs are devoted to historical recordings, dating from the late 1920s and 1930s, with Stravinsky appearing as conductor and as pianist.

The performers in the set include: