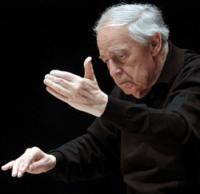 In addition to his formidable composing career, Boulez also directed most of the world's leading symphony orchestras and ensembles from the 1950s until ill health forced him to withdraw from conducting engagements in his late 80s. He served both as Chief Conductor of the BBC Symphony Orchestra from 1971-1975, and Music Director of the New York Philharmonic from 1971-1977. He was currently the Principal Guest Conductor of the Chicago Symphony Orchestra and will continue the following season as Conductor Emeritus. Boulez was particularly famed for his polished interpretations of twentieth century classics - Claude Debussy, Gustav Mahler, Arnold Schoenberg, Igor Stravinsky, Béla Bartók, Anton Webern and Edgard Varèse - as well as for numerous performances of contemporary music. Clarity, precision, rhythmic agility and a respect for the composers' intentions as notated in the musical score were the hallmarks of his conducting style.

The French composer and conductor has died aged 90.

Recording of the Week,  The Complete Works of Pierre Boulez on Deutsche Grammophon

Assembled under the composer’s personal supervision (and featuring many of his own recordings with Ensemble InterContemporain), this 13-CD collection includes several works which have not previously appeared on CD and features fearless pianism from Pierre-Laurent Aimard and Maurizio Pollini.