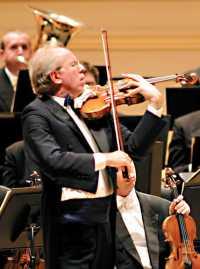 Kremer was born in Riga to parents of German-Jewish origin, his father being a Holocaust survivor. He began playing the violin at the age of four, receiving tuition from his father and his grandfather, who were both professional violinists. He went on to study at the Riga School of Music and with David Oistrakh at the Moscow Conservatory. In 1967, he won third prize at the Queen Elisabeth Music Competition in Brussels; first prize at the 1969 Paganini Competition in Genoa; and first prize again in 1970 at the International Tchaikovsky Competition in Moscow.

Kremer's first concert in the West was in Germany in 1975, followed by appearances at the Salzburg Festival in 1976 and in New York City in 1977. In 1981, Kremer founded a chamber music festival in Lockenhaus, Austria, with a focus on new and unconventional programming; since 1992 the festival has been known as "Kremerata Musica" and in 1996 Kremer founded the Kremerata Baltica chamber orchestra, composed of young players from the Baltic region. He was also among the artistic directors of the festival "Art Projekt 92" in Munich and is director of the Musiksommer Gstaad festival in Switzerland.

Kremer is known for his wide-ranging repertoire, extending from Antonio Vivaldi and J.S. Bach to contemporary composers. He has championed the work of composers such as Ástor Piazzolla, George Enescu, Philip Glass, Alfred Schnittke, Leonid Desyatnikov, Alexander Raskatov, Alexander Voustin, Lera Auerbach, Peteris Vasks, Arvo Pärt, Roberto Carnevale and John Adams. Among the many composers who have dedicated works to him are Sofia Gubaidulina (Offertorium) and Luigi Nono (La lontananza nostalgica utopica futura).

Find out more at https://en.wikipedia.org/wiki/Gidon_Kremer

Recording of the Week,  Chamber music by Mieczysław Weinberg

Gidon Kremer and friends perform three pieces of chamber music by the Polish-born Soviet composer, including an outstanding account of the Piano Trio.