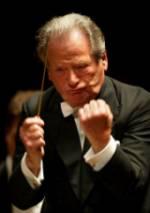 Born in Lincoln in 1924, Marriner studied in London, Paris and Maine and began his working life as a violinist. He founded the Academy of St Martin in the Fields (named after the Trafalgar Square church where the ensemble gave its first concert) in 1959 and together they have enjoyed a prolific recording career on labels such as Decca, Philips and EMI Classics, embracing repertoire from Corelli to Stravinsky, with Mozart and twentieth-century English music as specialities. Marriner’s career has also taken him to the States and mainland Europe, with conducting posts in Los Angeles, Minnesota and Stuttgart.

Marriner was knighted in 1985, following a CBE six years earlier; he continued to perform and record widely into his tenth decade, and had numerous upcoming engagements in his diary when he died on 2nd October 2016.

Find out more at https://en.wikipedia.org/wiki/Neville_Marriner

The conductor and founder of the Academy of St Martin in the Fields has died aged 92.