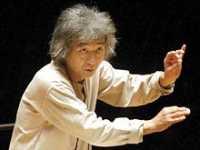 Born in Shenyang, China in the puppet state Manchukuo, under Japanese occupation, he studied at the Toho Gakuen School of Music in Tokyo and graduated in 1959 before travelling to Europe for further study. Charles Münch eventually took Ozawa to the United States for lessons at the Berkshire Music Center (now Tanglewood). He won a scholarship to study with Herbert von Karajan and the Berlin Philharmonic Orchestra, and in 1961 he was appointed an assistant conductor of the New York Philharmonic Orchestra by Leonard Bernstein. In December 1962 Ozawa was involved in a controversy with the prestigious Japanese NHK Symphony Orchestra when certain players, unhappy with his style and personality, refused to play under him. Ozawa went on to conduct the rival Japan Philharmonic Orchestra instead. He was music director of the Toronto Symphony Orchestra from 1965 to 1970, and of the San Francisco Symphony Orchestra from 1969 to 1976.

In 1973, Ozawa became music director of the Boston Symphony Orchestra (BSO). He held this position until 2002, the longest-serving music director of the BSO. In 1994, the BSO dedicated its new Tanglewood concert hall "Seiji Ozawa Hall" in honor of his 20th season with the orchestra. Towards the end of Ozawa's tenure, he received strong criticism from the American critic and composer Greg Sandow, which led to controversy in the Boston press.

Find out more at https://en.wikipedia.org/wiki/Seiji_Ozawa