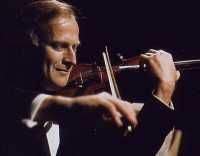 Yehudi Menuhin, Baron Menuhin, OM, KBE (April 22, 1916 – March 12, 1999) was an American violinist and conductor who spent most of his performing career in the United Kingdom and eventually became a British citizen. He was a student of Louis Persinger, George Enescu, and Adolf Busch. The name Yehudi means 'Jew' in Hebrew.

Katherine talks to the great French documentary-maker about his relationship with Yehudi Menuhin.