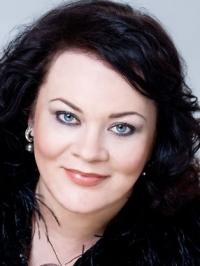 Born in Lithuania in 1961, Urmana studied in Vilnius and Munich, beginning her career as the Bavarian State Opera where she was mentored by the great dramatic soprano Astrid Varnay (to whom she was later compared after shifting to soprano repertoire). She began her career as a mezzo, specialising in zwischenfach roles such as Wagner’s Kundry and Ortrud, Verdi’s Eboli and Lady Macbeth, and Judit in Bartók’s Duke Bluebeard’s Castle; notable debuts included Eboli at the Edinburgh Festival in 1998, Sieglinde at Bayreuth in 2001, and Kundry at the Metropolitan Opera the same year.

Urmana’s discography includes Azucena on Riccardo Muti’s Il trovatore, Brünnhilde on Marek Janowski’s Siegfried, and both the soprano and mezzo solos on Semyon Bychkov’s and Philippe Jordan’s respective recordings. Honours and awards include Lithuania’s Woman of the Year prize in 2001, the Royal Philharmonic Society Award in 2002, and the title of Kämmersängerin (2009); she was designated an UNESCO Artist for Peace in 2016.

Find out more at https://en.wikipedia.org/wiki/Violeta_Urmana