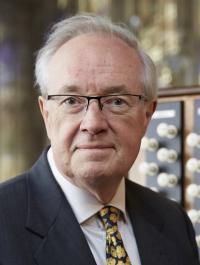 The English organist and conductor Stephen Cleobury was born in Bromley in 1948 and held positions at St John’s College Cambridge, Westminster Abbey, and Westminster Cathedral before being appointed Director of Music at King’s College Cambridge in 1982; he remained in the role for almost four decades, and made a huge number of recordings with the choir, including Handel’s Coronation Anthems and Messiah, Bach’s St John and St Matthew Passions, the Fauré, Brahms, Mozart and Duruflé Requiems, and several best-selling recordings based on the choir’s iconic Nine Lessons and Carols service. (One of Cleobury’s innovations during his time as Director of Music was the introduction of newly-commissioned carols for the service, with participating composers including Nicholas Maw, Judith Weir, John Rutter, John Tavener, and Jonathan Dove).

Cleobury has also recorded with the BBC Singers (of whom he was Chief Conductor for twelve years), and conducted Cambridge University Music Society between 1983 and 2009; his discography also includes several solo organ recitals. He was made a CBE in 2009, and was knighted in the 2019 Birthday Honours List. He died on 22nd November (St Cecilia's Day), less than two months after his retirement from King's.

Find out more at https://en.wikipedia.org/wiki/Stephen_Cleobury

The English organist and conductor, who was Director of Music at King’s College Cambridge for almost four decades, has died aged 70.