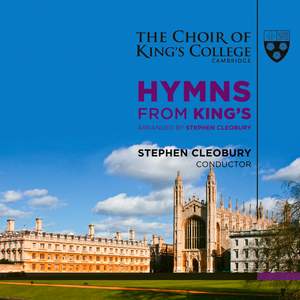 Formidable tunes from across the liturgical year in engaging arrangements by choirmaster Stephen Cleobury. The choir’s diction and tuning are excellent. — BBC Music Magazine, October 2016, 4 out of 5 stars

Vaughan Williams: All Creatures of Our God and King (Lasst Uns Erfreuen)

Goss, J: Praise my soul, the King of Heaven

Ireland: My song is love unknown

Dennis Brown: Just As I Am, Without One Plea (Saffron Walden)

Hymns from King’s' is a collection of hymn arrangements by Stephen Cleobury from the Peters Edition book of the same name. Covering the entire church year including Christmas and Easter, 'Hymns from King’s' contains arrangements, accompaniments and descants for some of the world’s most popular hymns as they are sung at King’s College. The release will be accompanied by an international press and marketing campaign and extensive touring and joins the label’s other critically-acclaimed recordings including 'English Hymn Anthems', a celebrated Fauré 'Requiem' [Recording of the Month in BBC Music Magazine] and '1615: Gabrieli in Venice': the first classical album ever to use Dolby’s new Atmos technology.

Formidable tunes from across the liturgical year in engaging arrangements by choirmaster Stephen Cleobury. The choir’s diction and tuning are excellent.