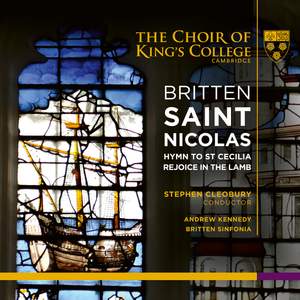 This Saint Nicolas is involving from the outset...Kennedy is a gripping Nicolas, palpably a man of practical Christian action, though careful not to over-project operatically...he has a storyteller's... — BBC Music Magazine, February 2014, 4 out of 5 stars More…

II. The Birth of Nicolas

III. Nicolas devotes himself to God

IV. He journeys to Palestine

V. Nicolas comes to Myra and is chosen Bishop

VII. Nicolas and the Pickled Boys

VIII. His piety and marvellous works

IX. The Death of Nicolas

The album’s release will be accompanied by an extensive international press and marketing campaign, supported by advertising and video for online and instore use.

The Choir will be touring the release repertoire in the UK in the Autumn, with concerts in Cambridge, Eton, Barbican and the Birmingham Symphony Hall.

The Choir of King’s College, Cambridge is one of the world’s foremost choirs and unquestionably among the most widely heard. It owes its existence to King Henry VI, who envisaged the daily singing of services in his magnificent chapel. This remains the Choir’s raison d’être, and is an important part of the lives of its 16 choristers, who are educated at King’s College School, and the 14 choral scholars and two organ scholars, who study a variety of subjects in the College. The Choir has been a breeding ground for numerous professional singers, including James Gilchrist and Christopher Purves.

This Saint Nicolas is involving from the outset...Kennedy is a gripping Nicolas, palpably a man of practical Christian action, though careful not to over-project operatically...he has a storyteller's subtlety and sensitivity...I'm not sure I've ever heard the resonant King's College acoustic captured better.

[Britten's] 50-minute dramatic cantata should be far better known, and this new recording on King’s own label does it superb justice...The disc includes equally polished performances of two of Britten’s most popular choral works, Hymn to St Cecilia and Rejoice in the Lamb.

I had some concern before listening to this disc that the choir might be too small and too sophisticated for the work, but to my surprise that is not the case...Overall the performance avoids the trap of over-sophistication which can so easily kill the impact of the work.

Kennedy is thrillingly stentorian when the drama demands, but he’s particularly affecting during his near-Mahlerian dark night of the soul as he languishes in prison...The logistics for this disc were mind-boggling...I know the phrase ‘sonic spectacular’ gets rather over-used these days, but trust me – it’s justified here.

The choir honours that association [with Britten] with a fresh, beautifully clean and perfectly enunciated account of the cantata Saint Nicolas – patron saint of children and mariners.

There are other competing interpretations already in the catalogue, but this one...delivers a particularly thrilling, emotionally charged impact...the playing is alert, crisp and brimful of character in the illustrative scene-painting...Kennedy is a fervent saint, voicing his faith and selfless devotion with strength and sensitivity, and the choral singing is first-rate.