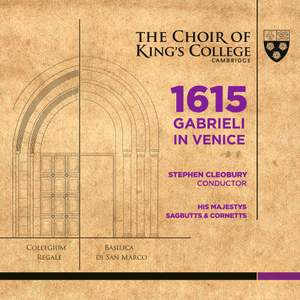 The choral sound is candid and transparent, the lower, adult voices sensitively balanced so as not to swamp the delicate timbre of the boy choristers. His Majestys Sagbutts and Cornetts offer... — BBC Music Magazine, February 2016, More…

Much of Giovanni Gabrieli’s music was composed for grand ceremonial occasions. 2015 marks not just the 400th anniversary of the publication of this collection of works from 1615, but also the 500th anniversary of the completion of King’s College Chapel. The Choir celebrates these anniversaries with the first classical album ever to use Dolby’s new Atmos technology, which uses ceiling-mounted speakers to reproduce the acoustics of the Chapel with unprecedented realism. This recording pays homage to one of the most influential musicians of the Venetian Renaissance from within one of the great buildings of the English Renaissance. As well as being principal organist at St Mark’s Basilica, Gabrieli was a prolific composer of sacred vocal and instrumental music. The early brass ensembles for which Gabrieli composed are no longer to be found performing in St Mark’s Basilica, but this tradition is alive and well in Cambridge. The Choir is joined by His Majestys Sagbutts & Cornetts playing faithful recreations of instruments from Gabrieli’s time. The Choir is one of Britain’s oldest musical institutions, but has always been committed to innovation in pursuit of excellence. This, the first classical album to be mixed and released using Dolby’s new Atmos technology, provides a three-dimensional experience like no other: the new surround sound-encoding includes height information as well as width and depth to offer a truly immersive sound experience. This recording will be released in both SACD and Pure Audio Blu-ray formats.

The choral sound is candid and transparent, the lower, adult voices sensitively balanced so as not to swamp the delicate timbre of the boy choristers. His Majestys Sagbutts and Cornetts offer flawless, vocally-inspired ensemble playing, their plangent wind instruments gleaming and glimmering like the gold mosaics in San Marco

His Majestys Sagbutts and Cornetts (yes that is a 'g') are well known for their expert playing of the fiercely difficult Renaissance cornett and the more easily handled trombone-like sackbutt. Within the spacious acoustic of Kings College Chapel they sound both lyrical and grand as required and when joining the voices the resultant polyphony is quite glorious to hear.

The posthumously published Symphoniae Sacrae collection contains the most magnificent music from Venice in the early 17th century. This choice selection includes, besides works such as the 14-part In ecclesiis and the 10-part Jubilate Deo, Hugh Keyte’s luxuriant reconstruction of the unfinished Quem vidistis pastores. Stephen Cleobury’s forces give opulent readings.

an exciting recording of this consistently brilliant music.