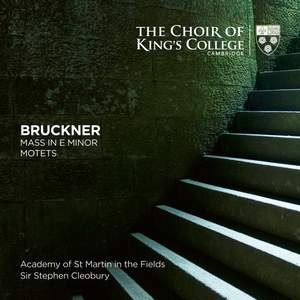 Mostly the pieces here are austere, and none approaches the grandeur of Bruckner’s biggest choral works. But they are unostentationally moving, and never more than on this, Cleobury’s last disc. — BBC Music Magazine, March 2021, 5 out of 5 stars (Performance) / 4 out of 5 stars (Recording) More…

Bruckner's E Minor Mass and a selection of his profoundly beautiful motets were selected by Sir Stephen Cleobury as his last album at King's, recorded only a few months before his death. Perhaps the deepest and most spiritual of Bruckner's masses, the 'Mass in E minor' is unusual in its scoring for choir, wind and brass. It is recorded here by the Choir of King's College, Cambridge and the Academy of St Martin in the Fields in King's College Chapel. The album is accompanied by a specially-commissioned Appreciation for Sir Stephen, written by Professor Iain Fenlon, as well as Shades of the Past in Bruckner's Sacred Music - another commissioned essay on Bruckner's works by Dr. Martin Ennis.

Mostly the pieces here are austere, and none approaches the grandeur of Bruckner’s biggest choral works. But they are unostentationally moving, and never more than on this, Cleobury’s last disc.

Cleobury’s long experience in this music shows, as does his understanding of King’s Chapel’s generously resonant acoustics. His 2019 singers come up trumps time and time again, delivering not only some exquisite soft singing but also, when required, plenty of full-throated – though never harsh – fortissimos.

A feature that sets Cleobury’s version apart from most other recordings is the use of boys’ voices for the soprano and alto parts, heard immediately in the haunting a cappella opening of the Kyrie, the trebles sounding strikingly pure and radiant...Another feature of Cleobury’s recording is the fleetness of the interpretation...I never felt that the performance was too fast, however, the choice of tempos throughout in keeping with the freshness of the approach and the modest scale of the forces employed.

It’s refreshing to hear this music sung with the urgent energy of boys’ voices, the textures almost raw. Their Locus iste soars gloriously in the King’s chapel acoustic.