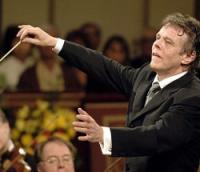 Jansons was born in Riga, the son of conductor Arvid Jansons. His mother, who was Jewish, gave birth to him in hiding after her father and brother were killed in the Riga ghetto. In 1946, his father won second prize in a national competition and was chosen by Yevgeny Mravinsky to be his assistant at the Leningrad Philharmonic. When his family joined him in 1956, young Jansons entered the Leningrad Conservatory, where he studied piano and conducting, although his father urged him to continue playing violin. In 1969 he continued his training in Vienna with Hans Swarowsky and in Salzburg with Herbert von Karajan.

The Latvian conductor, who held posts with the Bavarian Radio Symphony Orchestra and the Royal Concertgebouw Orchestra, has died aged 76 following a long struggle with a heart condition.

Mariss Jansons conducts the Third and Fourth symphonies with the Amsterdam orchestra in performances which showcase their lustrous string sound and richly glowing brass section.