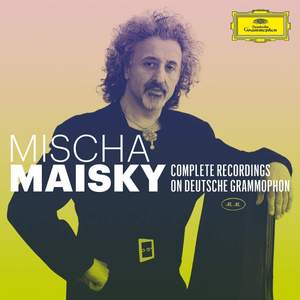 Prokofiev: The Tale of the Stone Flower, Op. 118: Waltz

Glinka: Kak sladko s toboyu mnye bits (How sweet it is to be with you)

Tchaikovsky: To bilo ranneyu vesnoy (It happened in the early spring), Op. 38 No. 2

Rimsky Korsakov: Eastern Song: Enslaved by the rose, the nightingale Op. 2 No. 2

Scriabin: Romance in A minor

Granados: Orientale (No. 2 from 12 Danzas españolas)

Prokofiev: Romeo and Juliet: Dance of the girls with lilies

The complete recordings on Deutsche Grammophon, with recordings made for Philips Classics, of one of the most successful and versatile cellists of the past decades – Mischa Maisky. Includes the first international release of: Tamezo Narita’s Hamabe no Uta (Song of the Sea Shore); Itsuki no Komoriuta (Lullaby of Itsuki, Japanese traditional); and Yun-Joon Kim’s Elegie.

The 44-CD limited edition combines Maisky’s solo recordings with concerti and chamber music recorded with many of the greatest musicians of our time, including: Martha Argerich, Gidon Kremer, Lang Lang, Berliner Philharmoniker, Leonard Bernstein and Zubin Mehta. Comprising the core cello repertoire but also lesser-known works and many cello arrangements of Lieder or chamber music, often written for or by Maisky.

Highlights include Maisky’s acclaimed 1985 and 1999 recordings of the Bach Suites, the Meditation album (1990); his Grammy-nominated Duo albums with Martha Argerich; and a recording of the Preludio to Villa Lobos’s Bachianas Brasileiras no.1 with Maisky multitracked eight times playing all parts.

Booklet (En/De/Fr) includes an interview with Mischa Maisky, conducted by Camille de Rijck, about his discography on Deutsche Grammophon and his musical partners.