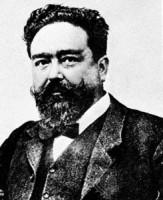 Isaac Manuel Francisco Albéniz y Pascual was a Spanish virtuoso pianist, composer, and conductor. He is one of the foremost composers of the Post-Romantic era who also had a significant influence on his contemporaries and younger composers. He is best known for his piano works based on Spanish folk music idioms.

Transcriptions of many of his pieces, such as Asturias (Leyenda), Granada, Sevilla, Cadiz, Córdoba, Cataluña, Mallorca, and Tango in D, are important pieces for classical guitar, though he never composed for the guitar. The personal papers of Albéniz are preserved in, among other institutions, the Biblioteca de Catalunya.