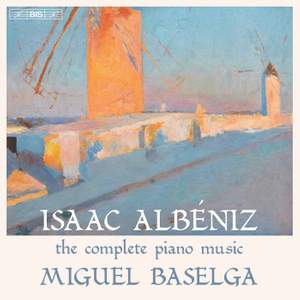 Albéniz: Minuetto No. 3 in A flat major

The piano works by Isaac Albéniz range from indisputable masterpieces to ravishing salon music, the composer painting with bright Spanish colours as well as the hues of Classicism and Romanticism. On nine discs, originally released between 1998 and 2017 and gathered here, Miguel Baselga guides listeners through the music of his compatriot, earning acclaim from reviewers worldwide: ‘pianism of the highest order’ (MusicWeb-International); ‘berauschend agil und rhytmisch spannungsgeladen’ (PIANONews); ‘un pianista elegante y refinado’ (CD Compact). Composed between December 1905 and January 1908, only a year before the death of Albéniz, Iberia is the crowning achievement of the composer’s genius. Marking a high point of the post-romantic piano literature, this collection of ‘12 nouvelles impressions’ was to serve as an endless source of inspiration for other composers throughout the twentieth century, admired by Debussy and Messiaen, who called it 'the marvel of the piano'. Baselga’s exhaustive series places Iberia in its proper context, and with the assistance of Albéniz scholar Jacinto Torres, he has been able to access original editions and scores, including rarities such as the Marcha militar by a nine-year-old Albéniz and the composer's two scores for piano and orchestra. We are also given the opportunity to hear three improvisations, transcribed from a phonograph recording made by the composer in 1903.