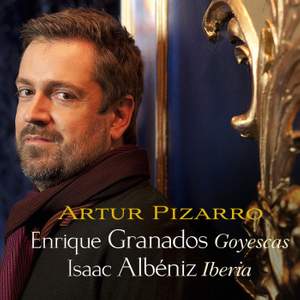 [Pizarro] brings spaciousness and a fine balancing of inner parts, in chords and counterpoint alike, alongside a freedom and energy very much his own...his formidable technique provides the means... — BBC Music Magazine, July 2010, 5 out of 5 stars More…

“Romantic music comes naturally to Pizarro; his delicate touch and sense of lyrical line are assured.” The Observer

Iberia is Albéniz’s last major work and is remarkable for its innovative keyboard writing, its authentic and characterful Spanish colours and the immense virtuosic challenge it presents.

The legacy of great Spanish composers and pianists permeated Artur’s musical education and upbringing creating in him a natural affinity to this evocative music.

Artur recorded the album on a specially made Blüthner piano, which was designed to replicate the sound of an early 20th century instrument and allowed him to mould and shape the instrument as his own.

Artur’s performance of Iberia at London’s Wigmore Hall in November 2009 was met with critical acclaim, The Telegraph stated: “Pizarro gave us a fine display of pianism”.

Prize-winning concert virtuoso Artur Pizarro is a regular live performer. Throughout 2010 he will perform the complete solo works of Chopin in a nine concert series at St John's, Smith Square, London to mark the 200th anniversary of Chopin's birth.

Artur has recently been selected as the international ambassador for the new Yamaha AvantGrand piano. This will see Artur performing around Europe and involved in international campaigns.

Renowned for his lyrical poeticism and outstanding virtuosity, pianist Artur Pizarro has a close affiliation with both BBC Radio 3 and Classic FM - both regularly broadcast his live performances and recordings.

[Pizarro] brings spaciousness and a fine balancing of inner parts, in chords and counterpoint alike, alongside a freedom and energy very much his own...his formidable technique provides the means to a musical and poetic end, rather than causing flamboyance.

He faces down the technical challenges of Goyescas with ease and never over-lards the Latin flavour: the softer, romantically stylised moments are exquisitely handled.

...these 'Goya-like' works...are love-poems and Artur Pizarro captures their improvised, dreamlike quality to perfection with a golden tone and caressing touch...it is difficult not to fall for Pizarro's lyrical grace, the even temperament of his approach and the unfailingly lovely sound he produces

Artur Pizarro certainly sets himself some enormous challenges, both musically and technically. But as the Portuguese pianist points out in his fascinating sleevenotes, both are works he has known all his life, and that familiarity certainly pays dividends in these likable performances, which have a wonderfully natural feel to them.