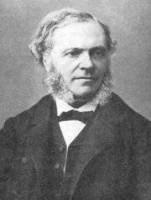 César-Auguste Jean-Guillaume Hubert Franck was a Romantic composer, pianist, organist, and music teacher who worked in Paris during his adult life.

He was born at Liège, in what is now Belgium (though at the time of his birth it was part of the United Kingdom of the Netherlands). He gave his first concerts there in 1834 and studied privately in Paris from 1835, where his teachers included Anton Reicha. After a brief return to Belgium, and a disastrous reception of an early oratorio Ruth, he moved to Paris, where he married and embarked on a career as teacher and organist. He gained a reputation as a formidable musical improviser, and travelled widely within France to demonstrate new instruments built by Aristide Cavaillé-Coll.

Recording of the Week,  Franck and Vierne from Alina Ibragimova and Cédric Tiberghien

The Russian violinist and French pianist bring a refreshing clarity and delicacy to two sonatas written for the Belgian composer-violinist Eugène Ysaÿe.