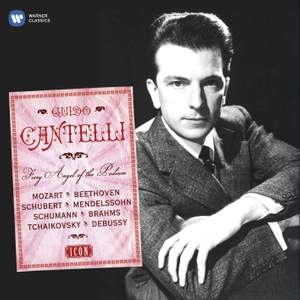 Cantelli's impact on the Philharmonia - Tchaikovsky: Romeo and Juliet

Cantelli's impact on the audience - Beethoven Symphony No. 5: Scherzo in rehearsal

This fine collection includes many exceptional Cantelli recordings of Cantelli’s remastered to perfection. Including 8 CDs of music and a new 60 minute audio documentary about Cantelli’s life this is the ultimate tribute to the great Italian conductor.

Among these recordings his Schumann’s Symphony no.4 (1953) and Brahms’s Symphony no.3 (1955) testify to the vitality of spirit and clarity of orchestral texture that were hallmarks of his performances.

He was considered a conductor of characteristic Italianate verve, tempered by a sensibility to expressive nuance and balance of timbre.

Cantelli was an advocate of rehearsing as well as performing without a score. He also liked to record in long takes, with the minimum of later correction.

Widely regarded as Toscanini’s successor he came to a tragic end only a few days after being appointed principal conductor at La Scala when he died in a plane crash aged only 36.

GUIDO CANTELLI – PORTRAIT OF A PERFECTIONIST

Guido Cantelli’s meteoric impact in his tragically cut-short life is recalled here from the perspectives of musicians, the audience and also a never before heard recording of a rehearsal. Former Philharmonia Orchestra members reincarnate their experiences with Cantelli, whose fanaticism can be heard as he repeats passages in the EMI recording session of Ravel’s Daphnis and Chloe (Second Suite), which is preserved in stereo. The effect Cantelli had on his public is also brought to life in audience memories of his performances in the concert hall. As well as the music of Ravel, there are extracts from EMI recordings of Cantelli conducting works of Beethoven, Rossini, Tchaikovsky, Franck, Debussy and Casella.