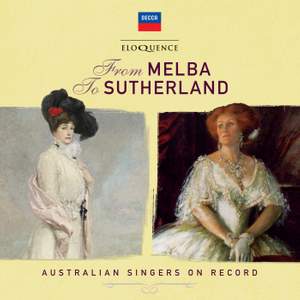 From Melba to Sutherland

Brahe: I passed by your window

"Jesu! By That Shuddering Dread"

5. "Time Was, When Love And I Were Well Acquainted"

"Honour And Arms Scorn Such A Foe"

"O Ruddier Than The Cherry"

Sullivan, A: The Pirates of Penzance or The Slave of Duty / Act 2

31. “When A Felon's Not Engaged In His Employment”

"Is This All You Can Bring?"

Fraser-Simson: Love Will Find A Way

Fraser-Simson: The Maid of the Mountains

A Paradise For Two

Malcolm McEachern: Is ‘e an Aussie, Lizzie, is ‘e?

Rodgers, R: Climb Every Mountain (from The Sound of Music)

Rodgers, R: The Sound of Music

"All Our Days And Our Nights"

German: The Yeomen of England

“I Am Behind You, Voss … Nothing Could Be Safer Or More Solid”

“I Am Looking At The Map Of My Hand”

From Melba to Sutherland: Australian Singers on Record is the first-ever comprehensive survey of the recordings of Australia’s greatest singers – in a unique new four-CD set from Decca, complete with biographies of each of the 80 artists, rare photographs, all contained within a 68-page booklet.

Why has there been such an extraordinary procession of world-class Australian singers over such an extended period of time? The question is often asked, but there are no easy answers. For Australia to have produced Dame Nellie Melba and Dame Joan Sutherland, two of the most famous singers of the twentieth century, is in itself something like a miracle. But there are so many more – some 80 wonderful singers in total.

The compilation has been meticulously researched by music historian Roger Neill and recording industry expert Tony Locantro. It covers a wide range of musical genres, from opera to music hall and from art song to variety. Co-producer Roger Neill has said: ‘Thirteen years in the making, From Melba to Sutherland is truly a once-in-a-lifetime project – the first-ever comprehensive survey of recordings by Australia’s greatest singers.'

Included with the issue is a detailed booklet covering all of the recordings with brief biographies and rare photographs of the singers, and an overview of their teachers. Each of the recordings has been expertly remastered from best-available original sources.

Aside from Melba and Sutherland, other world-famous Australians included are: Peter Dawson, a baritone who concentrated his career on the newly-emerged recording medium, selling some thirteen million records in the fifty years from 1904. Florence Austral, an outstanding Wagnerian soprano. June Bronhill, who followed Joan Sutherland as Lucia di Lammermoor at Covent Garden, but who chose to make her career in operetta and musical comedy with spectacular success. Malcolm McEachern, the bass half of the best-selling Flotsam and Jetsam duo who was equally accomplished in classical repertoire. Dame Joan Hammond, whose ‘Oh my beloved father’ from Puccini’s Gianni Schicchi was one of the best-selling classical discs of all time. Florrie Forde, one of the greatest music hall artists, whose hit songs included ‘Down at the Old Bull and Bush’, ‘Tipperary’ and ‘Pack up your Troubles’, and Richard Watson, the Adelaide-born bass who was a long-time principal with the D'Oyly Carte Opera Company, singing the comic bass-baritone roles of the Savoy Operas.

Alongside these greats, several outstanding Australian singers have been re-discovered, their lives and recordings researched afresh. Many of them had become just names, nothing more. They include: Syria Lamonte, the first woman singer to be recorded professionally in Britain in 1898. Frances Saville, a leading soprano in Mahler’s famous company in Vienna, who re-introduced several of the great Mozartian roles to the repertoire. Andrew Black, the only top-flight singer of Melba’s generation who moved from Britain to Australia. Violet Mount, who, unable to break into the opera houses of Europe, made an outstanding career on the music halls singing operatic arias as the masked ‘L’Incognita’. Lorna Sydney, who went to further her career in Vienna, but was interned as an alien during World War II. She became a leading member of the Vienna State Opera at the cessation of hostilities.

Also there are many extremely rare recordings included in the anthology, some of them existing in just a single instance. For example, there is a private recording of the great Australian baritone, Harold Williams, singing a rousing Cobb and Co song, ‘John Bax’. Another great rarity is an unpublished test pressing by Florence Austral singing Brünnhilde’s ‘Battlecry’ from Wagner’s Die Walküre.

This high prestige project has been actively supported throughout by Richard Bonynge and the late Dame Joan Sutherland, who have written: ‘It is wonderful to be able to hear these exceptional voices, singers of real quality. It is a mammoth collection and Australia can be proud to share her artists with the world.’

This set gives an invaluable historical cross-section of Antipodean singers in both commercial and rare archive recordings.

a great celebration of a country’s contribution to the art of opera.