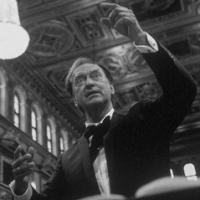 Born in Berlin on 6th December 1929 and descended from Hapsburg and Huguenot nobility, the Austrian conductor and cellist Nikolaus Harnoncourt spent five decades at the forefront of the historically-informed performance movement and left a vast legacy of recordings including the first complete set of Bach cantatas of authentic instruments and boy sopranos (made with his friend Gustav Leonhardt and his Concentus Musicus Wien from 1971-1990). His interpretations of Beethoven, Brahms, Bruckner and Schubert symphonies as well as the operas of Mozart demonstrate the same scholarly rigour and attention to period detail as his recordings of the 'early music' which initially made his name, and to which he would return throughout his long career.

Harnoncourt made his final recording (of the Fourth and Fifth Beethoven Symphonies) in May 2015, and announced his withdrawal from conducting engagements later that year; he died peacefully at home in Austria on 5th March 2016, surrounded by his family, just four months after retiring.

Find out more at https://en.wikipedia.org/wiki/Nikolaus_Harnoncourt

Katherine listens to the recording of the Austrian conductor's final public performances.

A tribute to the Austrian cellist and conductor, who died on Saturday aged 86.