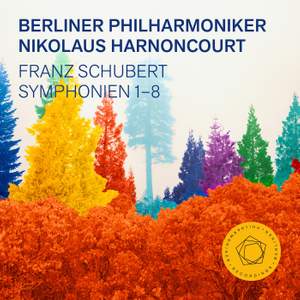 beautifully and practically presented, while the performances, the performances, especially of the early symphonies, Nos 1-6, are miraculously alert and affectionately Viennese in style. Harnoncourt’s... — Sunday Times, 1st October 2017 More…

In 2015, our Schubert Edition with the Berliner Philharmoniker and Nikolaus Harnoncourt received high praise from critics all over the world. The BBC Music Magazine celebrated the recordings as a “feast of Schubert”, and in France they were awarded the prestigious Diapason d’Or. The edition is now being released in a budget version. It presents the composer’s eight symphonies on five CDs/SACDs which can be played on any CD/SACD player. The edition includes a top-quality slipcase and a comprehensive booklet. The qualities of the performances which were recorded between 2003 and 2006 are also revealed in the CD/SACD edition. This Schubert is colourful and dramatic – and represents a unique synthesis in which the famous sound of the Berliner Philharmoniker is as evident as Nikolaus Harnoncourt’s familiarity with the transparency and sound speech of historical performance practice.

beautifully and practically presented, while the performances, the performances, especially of the early symphonies, Nos 1-6, are miraculously alert and affectionately Viennese in style. Harnoncourt’s lilting tempi and phrasing sound freer and more spontaneous than in his studio recordings with the Concertgebouw Orchestra...An exhilarating set.