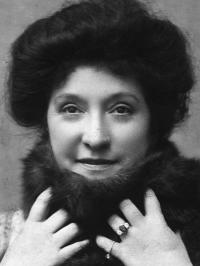 Dame Nellie Melba GBE was an Australian operatic soprano. She became one of the most famous singers of the late Victorian era and the early 20th century, and was the first Australian to achieve international recognition as a classical musician. She took the pseudonym "Melba" from Melbourne, her home town.

Melba studied singing in Melbourne and made a modest success in performances there. After a brief and unsuccessful marriage, she moved to Europe in search of a singing career.