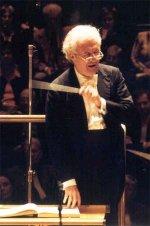 He first found wide acclaim when he stood in for an ill Otto Klemperer in a performance of Wolfgang Amadeus Mozart's opera, Don Giovanni, at the Royal Festival Hall in 1959. A year later, he stood in for Thomas Beecham in similar circumstances in Mozart's The Magic Flute at Glyndebourne.

In the 1960s he worked at Sadler's Wells Opera, the London Symphony Orchestra and the BBC Symphony Orchestra. In 1971 he succeeded Georg Solti as principal conductor at the Royal Opera House, where he had given occasional performances before, remaining there until 1986. He became noted for championing the operas of Michael Tippett, giving the premieres of his works The Knot Garden (1970), The Ice Break (1977) and The Mask of Time (1984). In 1977 he became the first English conductor to appear at the Bayreuth Festival (dedicated to the works of Richard Wagner) where he conducted Tannhäuser.

Find out more at https://en.wikipedia.org/wiki/Colin_Davis

Sir Colin Davis and the London Symphony Orchestra mark the 150th anniversary of the English composer’s birth with a marvellous new live recording of his tribute to ‘my friends pictured within’.

Recording of the Week,  Colin Davis conducts the LSO in Haydn Symphonies

James listens to Colin Davis and the LSO's sparkling, poised accounts of late symphonies by Haydn.