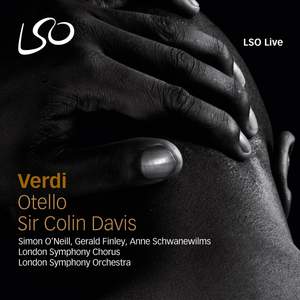 everything contributes to accentuating extremes: Colin Davis gets the LSO, in shattering form, to play chords like cannon shots...The two male leads are superb: Simon O'Neill is the most complete... — BBC Music Magazine, December 2010, 4 out of 5 stars More…

Recording of the Week,  Verdi's Otello from the LSO and Colin Davis

Simon O’Neill is the jealousy-wracked general, Gerald Finley his nemesis, and Anne Schwanewilms his ill-fated wife in this edge-of-the-seat live recording, made at the Barbican last year and full of ‘savage and terrifying playing’ from the LSO.

‘an electrifying account ... Simon O’Neill made a tremendous debut in the title-role, giving notice that he is the best heroic tenor to emerge over the last decade’ Daily Telegraph

Sir Colin Davis’s eagerly anticipated recording of Verdi’s Otello is released on the 10th anniversary of the LSO Live label. Opera has always formed an important part of the label’s output – recording concert performances of opera allows listeners to enjoy the drama of a live performance without the problems associated with recording in a theatre.

Among Sir Colin’s greatest triumphs on LSO Live have been his award-winning recordings of Berlioz’operas plus Peter Grimes, Fidelio and Verdi’s final opera, Falstaff. Falstaff was released in 2004 and collected the Grammy Award for Best Opera.

Sir Colin is joined, in the title role of Otello, by one of the world’s most exciting young tenors. New Zealander Simon O’Neill stepped in at short notice to these concerts, making his debut in the role (although he had studied it with Domingo), delivering what can only be described as an astonishing performance. The villainous Iago is played by Gerald Finley and Otello’s wife, Desdemona, by Anne Schwanewilms.

Verdi had retired from opera following the premiere of Aida in 1871 but was eventually persuaded by his publisher to work with the librettist Arrigo Boito. As with Falstaff, Verdi’s final opera on which they would subsequently collaborate, they turned to Shakespeare for inspiration. Otello, which was premiered in 1887, marked a significant evolutionary development in Italian opera and is widely regarded as one of the great operatic masterpieces.

‘This was an electrifying account of a masterpiece, conducted with an explosive energy that belies Sir Colin’s eighty years and pushed the LSO to the top of its game. Simon O’Neill made a tremendous debut in the title-role, giving notice that he is the best heroic tenor to emerge over the last decade … Gerald Finley was an arrestingly crisp and snakily plausible Iago … Verdi’s great music drama shone in all its power and glory’ Daily Telegraph

‘a performance of Verdi’s opera that had finesse, fervour and glorious lyricism … Such is Davis’s rapport with the LSO and its rampant Chorus that he can unleash greater musical power with an elegant flick of the baton than most conductors muster with flailing arms. Gerald Finley was a superb Iago: insiduously sinister, yet sustaining a wonderfully suave line. And the New Zealand tenor Simon O’Neill gave an immense performance … he will make the Moor his own’ The Times

‘a thrilling performance from beginning to end … an evening to treasure; not just for Davis’s contribution, but for an impressive debut from the young New Zealand tenor Simon O’Neill. O’Neill mastered Otello’s many moods with a striking musicality and an evenness of tone throughout the range. He will go far, and promises to be the outstanding Wagner Heldentenor we have been longing far … the men, led by Gerald Finley’s totally convincing and committed Iago, were splendid’ Mail on Sunday

everything contributes to accentuating extremes: Colin Davis gets the LSO, in shattering form, to play chords like cannon shots...The two male leads are superb: Simon O'Neill is the most complete Otello since Domingo...Finley's debut as Iago is also a great reading - the most chilling I have ever heard.

This is worth hearing for Finley's superb performance as Iago...listen to his chilling account of 'Cassio's dream', or the way he can inflect a single word like 'capitano'...Schwanewilms is touching as Desdemona, and the smaller roles are well taken.

Age has not dimmed Davis’s musical vitality, any more than it did Verdi’s...Davis inspires the London Symphony Orchestra and Chorus to a performance of vigour and refinement, and it’s for their contribution – and Gerald Finley’s suave, stylish Iago – that this recording stands out.

Finley gives a masterly account of [Iago], his voice seemingly transfigured by the Italian music and language...his singing - firm and resonant - is scarcely to be bettered on record...O'Neill is an unusual Otello in that he is so unequivocally a tenor, with no hint of baritone in his timbre...the playing is alert and sensitive to drama and text.

Finley is suave, his experience in Lieder showing in detailed enunciation and delivery of the text...Clayton is bright-toned and much less wimpy than some Cassios; you could appreciate how Otello promoted him over Iago...In spite of the lack of Italianate voices, O'Neill's heroic singing and Davis's unexpectedly fiery conducting still make this a satisfying account of Verdi's miraculous score.

[O'Neill's] is one of the most dramatically sung and exciting performances you are ever likely to hear...his phrasing is beautiful and his top notes really ring...[Finley's] smooth and velvety tone succeeds where many others have struggled in portraying the calculated and cunning aspect of his villainy...The whole performance is exhilarating and it comes very highly recommended.

throughout, [O'Neill's] clarion tone is thrilling. But the heroes are Gerald Finley, a supremely malignant Iago, the superb orchestra and chorus, and Colin Davis, who makes the terror and pity of the opera almost unbearably vivid. This is an Otello to rank with Davis’s LSO Live Falstaff

a spellbinding account, thanks to O’Neill, Anne Schwanewilms’s Desdemona and Gerald Finley’s Jago, but above all to Colin Davis’s warm, urgent but never forced interpretation

Davis’s electrifying conducting keeps the temperature high throughout this gripping performance...Simon O’Neill makes a powerful and confident debut in the title role, well matched against Gerald Finley’s subtle and sneaky Iago...with the additional merits of Allan Clayton’s vivid Cassio, the splendid chorus and superb playing from the LSO, this is a front-runner in the field.