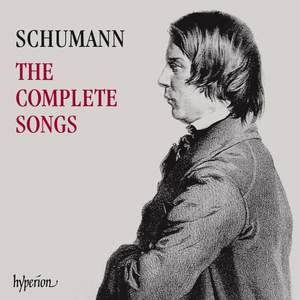 The Lieder of Robert Schumann in chronological order

XXI. Was will die einsame Träne?

Schumann’s songs are among the greatest musical achievements of the nineteeth century, and this is the perfect release with which to mark the composer’s 200th birthday.

This marvellous collection comprises Schumann’s complete songs, presented for the first time in their chronological sequence of composition, with complete song texts, and chronology of Schumann’s life and songs by Graham Johnson.

Johnson is, of course, also the curator and unifying musical force of this series, accompanying his hand-picked selection of singers – some of the greatest lieder performers of today, and indeed of tomorrow – with utter sensitivity.