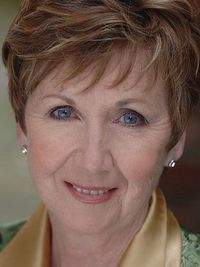 The Irish lyric mezzo Ann Murray was born in Dublin in 1949 and studied in her home city and at the Royal Manchester College of Music (now the RNCM). She made her professional debut in the title-role of Gluck’s Alceste in 1974, and went on to win particular acclaim in trouser-roles such as Handel’s Xerxes, Ariodante, Giulio Cesare and Rinaldo, Mozart’s Sesto, and Strauss’s Octavian in Der Rosenkavalier and the Composer in his Ariadne auf Naxos. Her wide discography includes many recordings with the pianist Graham Johnson, including his complete Schubert Lieder project on Hyperion.

Murray was made a Dame in the Queen’s Golden Jubilee Honours List in 2002, is a Kämmersangerin of the Bayerische Staatsoper, and holds an honorary doctorate from the National University of Ireland. She was married to the tenor Philip Langridge, whom she met during a rehearsal of Cavalli’s L’eritrea in 1975 and with whom she frequently appeared in recital.

Find out more at https://en.wikipedia.org/wiki/Ann_Murray