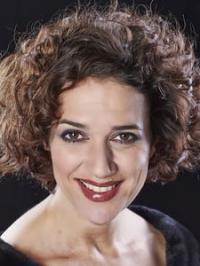 Juliane Banse was born in 1969 in Tettnang and studied in Zürich (where she grew up) and Munich, making her professional debut as Pamina at the Komische Oper Berlin in 1989. She initially specialised in soubrette and light lyric roles such as Zerlina, Ilia, Susanna, Marzelline (recorded under Simon Rattle) and Zdenka (with which she made her Metropolitan Opera debut in 2014), but more recently she has moved into weightier repertoire, including Wagner’s Elsa, Beethoven’s Leonore and Strauss’s Marschallin.

Her discography includes Mahler’s Eighth Symphony with Simon Rattle and the City of Birmingham Symphony Orchestra, his Fourth Symphony with Pierre Boulez, Klaus Hartmann’s Simplicius Simplicissimus (‘Banse as the shepherd brilliantly meets the soprano part's technical challenges while evoking the naivety of the idealistic character’ – BBC Music Magazine), and numerous recitals of twentieth-century song including Hindemith’s Marienleben (‘her identification with Rilke’s text is complete and compelling – Sunday Times), In arm der Liebe (including music by Pfitzner, Korngold, and Joseph Marx), and an album of Berg and Hartmann on ECM which was a finalist at the BBC Music Magazine Awards.

Find out more at https://en.wikipedia.org/wiki/Juliane_Banse