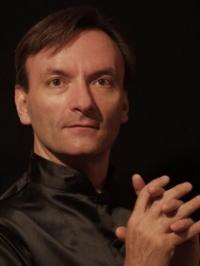 Born in Cheshire, Hough won the piano section of BBC Young Musician of the Year in 1978 and completed his studies the Juilliard, funded by the inaugural Royal Philharmonic Society scholarship.

Hough is now widely regarded as one of the most versatile and intelligent performers of his generation: his extensive discography includes numerous imaginatively-planned recital-discs, single-composer albums focusing on Hummel, Chopin, York Bowen, Mompou and others, and concertos by Brahms, Grieg, Liszt, Rachmaninov.

He is also a prolific composer, with notable works including a cello concerto for his friend Steven Isserlis, the song-cycles 'Other Love Songs' and 'Herbstlieder', two piano sonatas and a wide range of transcriptions and arrangements.

Something of a Renaissance Man, Hough is a regular contributor to Telegraph blogs (where he often writes on religion, sexuality and ethics as well as music) and his paintings were the subject of a solo exhibition at London's Broadbent gallery in 2012; he also does extensive charity and education work. He was made a CBE in the 2014 New Year Honours list.

Find out more at https://en.wikipedia.org/wiki/Stephen_Hough

Katherine talks to the pianist about his award-winning pairing of two Romantic concerti.

Interview,  Stephen Hough on 'In the Night'

The great British pianist and composer talks to Katherine about his new disc 'In the Night', out now on Hyperion.