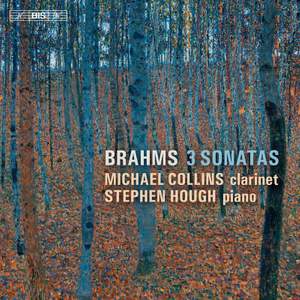 Friends of long standing as well as regular partners in chamber music, Michael Collins and Stephen Hough bring their combined musical insights and expertise to bear on Johannes Brahms’s sonatas for clarinet and piano. Together with the composer’s trio for clarinet, cello and piano and clarinet quintet, the sonatas are among the most treasured works in the repertoire of the instrument – but it is partly down to good luck that we have them at all. When Brahms in 1891 heard the clarinettist Richard Mühlfeld, principal clarinet of the Meiningen Court Orchestra, he had already announced his retirement. He was enraptured by Mühlfeld’s playing and its vocal qualities, however, and made a ‘comeback’: during the following couple of years he composed all four of his clarinet works. These were written especially for Mühlfeld, whose spirit does seem to pervade the two sonatas – we hear an unusually sunny and lyrical Brahms, with plenty of opportunity to sing for both instruments. When the sonatas were published, they appeared with alternative viola parts to replace the clarinet, and soon violin versions prepared by the composer were also brought out. For the opening work on the disc, Michael Collins has therefore taken a leaf out of Brahms’s book, by adapting the composer’s Violin Sonata No. 2, another late work. The amount of adaptation needed is small: a lot of the violin writing fits the clarinet well, and the sonata share much of the songlike quality of the two ‘real’ clarinet sonatas.

With the eminent Brahms interpreter Stephen Hough, Collins brings special musical insights to these two late works. Notably, they triumphantly solve the interpretative conundrums posed by some of the composer’s equivocal performing directions...An added bonus is Collins’s transcription of the Amajor Violin Sonata which actually sounds just as idiomatic on the clarinet as in its original incarnation.

In fact, Collins and Hough deliver such a sensitive reading of the violin sonata that for me it is the highlight of the program. You feel, which isn’t often true of arrangements, that Brahms wrote a third clarinet sonata in the same autumnal mood as the two he actually did write.

Even if you already have Collins’s first-rate Chandos disc, this beautifully recorded BIS CD is a worthy investment, not least for the exceptionally successful arrangement of the A major Violin Sonata.

Brahms marks the first movement of his A major violin sonata 'Allegro amabile', and Hough and Collins extend the sentiment throughout this lively, ever-amiable recital - the two artists' long-standing relationship with one another and with this repertoire is evident in every phrase. Collins's own transcription of that violin sonata works a treat, showcasing the sweetness and security of his extreme upper register, and with a hint of welcome bite in the tone replicating the effects of the original's double-stopped octaves.

The release marks Collins’s 60th birthday later this month, and the sonatas provide a perfect showcase for his creamy tone and superb technical facility; Stephen Hough is the equally immaculate pianist.