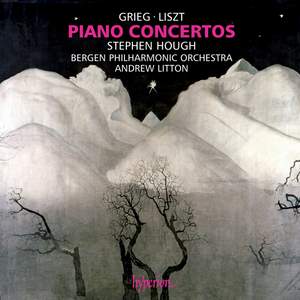 These two like-minded musicians manage to bring to these much-recorded works not merely thrilling virtuosity and lyrical depth but a Mendelssohnian lightness of touch where needed...Litton, himself... — Classic FM Magazine, February 2012, 5 out of 5 stars More…

Recording of the Week,  Franz Liszt

Chris rounds up some of the many releases issued to commemorate the bicentenary of the Hungarian composer’s birth this week, including a song-recital from Diana Damrau and Helmut Deutsch, the Piano Concertos from Stephen Hough and the Bergen Philharmonic, and selected piano works from Lise de la Salle.

A concerto album from Stephen Hough is always a significant event. For this new recording Stephen travelled to Bergen – Grieg’s home town – to join forces with Andrew Litton and the Bergen Philharmonic Orchestra in performances of Grieg and Liszt that are set to become landmark recordings of all three concertos.

Grieg’s A minor Piano Concerto, with its plethora of great tunes, is one of the most popular of all Romantic works, while Liszt’s two highly original concertos present unique challenges to both pianist and orchestra. These performances are exciting, magisterial and highly coloured, with breathtaking virtuosity harnessed to poetic refinement and finesse – hallmarks of Stephen’s playing that have already helped his concerto recordings to win two Gramophone ‘Record of the Year’ accolades.

Stephen Hough and Andrew Litton continue the astonishing success of their collaboration in Rachmaninov’s concertos, Hyperion’s fastest-selling recording. The Bergen players provide freshly idiomatic support in the Grieg and revel in the sumptuous scoring of the Liszt. The results are thrilling, and this deserves a place in any music lover’s collection, no matter how familiar the music.

Released to coincide with the twin anniversaries of Liszt’s birth (200 years ago) and Stephen’s own 50th birthday (in November), this recording is an apt celebration of both.

These two like-minded musicians manage to bring to these much-recorded works not merely thrilling virtuosity and lyrical depth but a Mendelssohnian lightness of touch where needed...Litton, himself a fine pianist, is one of the best orchestral accompanists on the planet, following Hough's every nuance with pin-point precision and lovingly shaping the many woodwind and string solos.

Introspective (but never lost in introspection) one minute, of the most refined bravura the next, he expresses a personality all his own, brilliantly alert to mercurial changes of mood and clearly riding on the crest of a wave of success. With technique honed to a state of diamond-like brilliance, he gives us rapier-like cadenzas and glissandos..that flash like summer lightening.

[Hough] seems to get just the right balance of bravura, muscle and abandon with spontaneity, lightness and wit. He is well supported by the Bergen Philharmonic under Andrew Litton.

one of the Liszt bicentenary’s prime releases, from Britain’s greatest living magician of the keyboard...this release is witness to [Hough's] mastery in the mainstream Romantic concertos...Hough highlights [Grieg's] Concerto’s debt to Liszt, with its grandiloquent gestures and exhibitionist virtuosity...His vivaces glitter, his agitatos thrill with dramatic éclat, yet essentially he appreciates the songs-without-words that permeate these bravura works.

Does the world really need another recording of the Grieg piano concerto? The answer has to be an emphatic yes when the soloist is the barnstorming Stephen Hough, a pianist with the fascinating ability to take a venerable work, strip it of its patina and present it as though for the very first time. This is a wonderfully alert performance, mixing novel tempi with awesome technique and breathtaking, tingling tension.

what Stephen Hough excels at is the quick transformation, the mercurial shifts from comedy to heartfelt sincerity. He’s also a fantastic chamber player, and the Second Concerto’s quieter moments are gorgeous here. There’s some particularly lovely playing from the Bergen orchestra’s principal cello