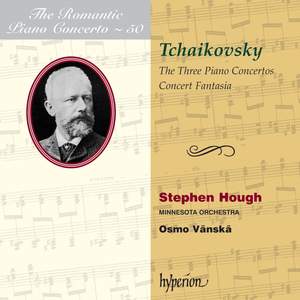 Both soloist and conductor seem committed to emphasising the architectural integrity of Tchaikovsky's musical thinking...Yet by keeping things moving and delivering performances that project... — BBC Music Magazine, May 2010, 5 out of 5 stars More…

The Romantic Piano Concerto series reaches Volume 50. This series has been described as a jewel in Hyperion’s crown and one of the glories of the recording industry. Rarely in the history of recorded music has such a rich seam of undiscovered delights been mined to such consistently dazzling effect. These first fifty volumes include 131 works for piano and orchestra: fifty-nine of these works are premiere recordings and many other featured works have only been recorded once before. The performers include some of the greatest pianists, orchestras and conductors in the world, and each disc in itself is a miracle of virtuosity, scholarship and musicianship.

For Volume 50, a stellar cast has been assembled for a two-disc set that includes, unusually, one of the most famous concertos in the repertoire. Tchaikovsky’s Piano Concerto No 1 has certainly achieved warhorse status—but in the expert hands of Stephen Hough it is a new creature. With the rest of this fascinating two-disc set we are in more usual RPC territory, with music which is actually not widely known. This is a complete survey of Tchaikovsky’s music for piano and orchestra and includes alternative versions of the second movement of Piano Concerto No 2 as well as some delicious extras.

Stephen Hough performed all four concertos at the BBC Proms in 2009 and was described as ‘the epitome of a “golden age” virtuoso with his balletic elegance and dazzling rhythmic reflexes’ (The Independent). Armed with this inestimably important experience, he travelled to Minnesota to record the set live with the Minnesota Orchestra under their acclaimed conductor Osmo Vänskä. The result is a set of unique importance: a winning combination of a pianist at the zenith of his artistry, a world-class orchestra and director, a pre-eminent producer and engineer, repertoire both familiar and unknown, and packaged with even more than the usual care that customers have come to expect from Hyperion.

Both soloist and conductor seem committed to emphasising the architectural integrity of Tchaikovsky's musical thinking...Yet by keeping things moving and delivering performances that project an exceptionally high level of adrenaline, Hough brings a much greater degree of coherence

The old warhorse comes up as fresh as paint. Even with 130 alternatives on the market, this is an exceptional reading with brisk tempi and subtle nuances...giving special pleasure...This is a great recording - no doubt about that - and one which, if there is any justice, will garner any number of awards.

Sparks fly thanks to his outstanding conductor, who clearly empathises with Hough’s refusal to lay on the romantic rubato with a trowel....He makes the strongest possible case for the restoration of the neglected and often reviled G major concerto

His ability to strip off the layers of varnish from a work so that it recaptures much of its startling freshness is remarkable, and his combination of bravura swagger and the most fastidious care with line and texture is utterly convincing.

Anyone who heard Stephen Hough's barnstorming performances of all the Tchaikovsky piano concertos at last year's Proms will want to own these CDs...Captured live, they recreate all the raw excitement of those memorable evenings at the Albert Hall.

Hough typically refuses to treat it as an overworked warhorse: here it is injected with exhilaration, the bravura tempered with limpid lyricism.

With Hough at the keys, the First Concerto becomes no warhorse taken for a dutiful trot but a freshly imagined masterpiece bouncing with surprises and invention...But it’s the set’s lesser pieces that offer the most revelations.