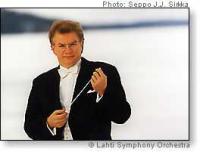 It all began when the Estonian conductor Neeme Järvi stopped recording Sibelius for the Swedish record company, Bis. The indefatigable Robert von Bahr wanted to record all of Sibelius’s work - and the unrecorded orchestral pieces were given to the then totally unknown Lahti Symphony Orchestra (LSO) under Osmo Vänskä.The rest is history. The recording of the original version of Sibelius’s Violin Concerto brought the orchestra their first Gramophone award. Since then the number of awards has multiplied. Following several Sibelius rarities the orchestra recorded the complete symphonies of Sibelius in 1997. These prompted the distinguished Sibelius expert and writer, Robert Layton, to compare the achievements of Osmo Vänskä with the best recordings of Colin Davis, Herbert von Karajan and Thomas Beecham. In the New York Times, Alex Ross described Vänskä as "one of the most important contemporary interpreters of Sibelius."

Joined by soprano Carolyn Sampson, Osmo Vänskä and the Minnesota Orchestra continue their Mahler cycle with an exquisitely-detailed performance of the Fourth Symphony.