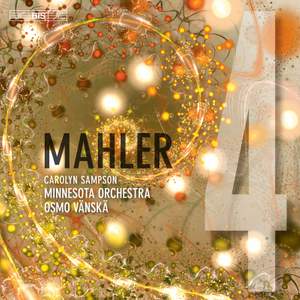 Vänskä’s tempos are relatively laid back; as so often, he seems to aim more for long-term continuity than for the sensational detail – though he is quite capable of clinching a dramatic moment…By... — BBC Music Magazine, March 2020, 4 out of 5 stars More…

Joined by soprano Carolyn Sampson, Osmo Vänskä and the Minnesota Orchestra continue their Mahler cycle with an exquisitely-detailed performance of the Fourth Symphony.

In Gustav Mahler's first four symphonies many of the themes originate in his own settings of folk poems from the collection Des Knaben Wunderhorn (The Boy's Magic Horn). A case in point, Symphony No. 4 is built around a single song, Das himmlische Leben (The Heavenly Life) which Mahler had composed some eight years earlier, in 1892. The song presents a child's vision of Heaven and is hinted at throughout the first three movements. In the fourth, marked ‘Sehr behaglich’ (Very comfortably), the song is heard in full from a solo soprano instructed by Mahler to sing: ‘with serene, childlike expression; completely without parody!’ The symphony is scored for a typically large, late-romantic orchestra (though without trombones and tuba) and an extensive percussion section which includes sleigh bells as well as glockenspiel. However Mahler mostly deploys his forces with a transparency and lightness more akin to chamber music or eighteenth-century models like Mozart or Haydn. The Fourth has become one of his best-loved symphonies, and is here performed by Minnesota Orchestra and Osmo Vänskä, joined by the angelic voice of English soprano Carolyn Sampson.

Vänskä’s tempos are relatively laid back; as so often, he seems to aim more for long-term continuity than for the sensational detail – though he is quite capable of clinching a dramatic moment…By the time Carolyn Sampson’s touching delivery of the song-finale has reached its lullaby-like conclusion, all the work’s shocks and contrasts have resolved in this reading into a satisfying whole.

One will have to look elsewhere for an earthy Mahler Fourth. This one is gentle and other-worldly. There’s no hesitancy in recommending it on those terms and especially for the superb recorded sound and orchestral execution.

There are many aspects of this excellent performance (and recording) that remind me of George Szell’s famous version with the Cleveland Orchestra – a crystalline quality, super-transparent and immaculately detailed, and mindful always of the work’s classical precedents, not least Haydn with his wit and charm...Sampson tenders some gorgeous singing in the finale’s ‘Das himmlische Leben’. It exudes maturity in its engagement and perceptive use of words.

Make no mistake: this Mahler 4 ranks with the very best, and I shall return to it very often.