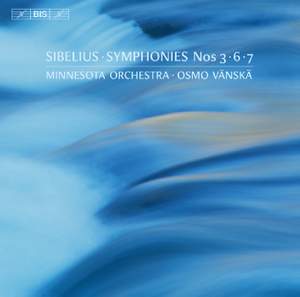 Katherine talks to the Finnish conductor about his second Sibelius cycle on BIS - the final instalment of which was a Presto Disc of the Year.

Recording of the Week,  Osmo Vänskä completes his cycle of Sibelius symphonies with the Minnesota Orchestra

James listens to the final volume of Osmo Vänskä's Sibelius cycle with the Minnesota Orchestra, comprising Nos. 3, 6 and 7.

The first disc in the Sibelius cycle from Osmo Vänskä and Minnesota Orchestra made the reviewer in Gramophone speculate about a 'benchmark cycle for the 21st century' whilst the second instalment received a Grammy for 'Best Orchestral Performance'. The long-awaited final disc in the cycle, with a playing time of 82 minutes, combines the Finnish master's third symphony, completed in 1907, with his two final works in the genre, composed more or less in tandem between 1922 and 1924. Symphony No. 3 in C major is Sibelius's most classical symphony, a radical change in direction after the opulence of its predecessor. It has been claimed that the mastery of form in its first movement is comparable only to the greatest Viennese masters – and at the same time the conductor Koussevitzky, one of the composer's strongest champions, spoke of it as ‘music far in advance of its time’. Fifteen years later, and after the heroic Fifth Symphony, Sibelius again presented a symphony which surprised those admirers who expected more of the same. Sibelius gave Symphony No. 6 a refined modal flavouring, avoiding both virtuoso orchestral writing and massive climaxes, and likened it to an offering of 'pure spring water'. This he followed up immediately with what would become his symphonic swan song – the stern and majestic Seventh Symphony. A one-movement work, it was at first billed as ‘Fantasia sinfonica’ but it is indeed a true symphony, its single movement portraying elements of all four movements of symphonic practice.

The orchestra's sound under Vänskä has a kind of sharp-focus richness that's never cloying.

Vänskä’s Sibelius is all about clarity – of rhythm, of texture, of intention. It is zealously unfussy and entirely without exaggeration. But it can stop you in your tracks...The Third and Sixth Symphonies feel even more closely related than usual...One just knows that the ear-pricking clarity throughout these performances is of Vänskä’s and not the balance engineer’s making.

Despite wonderful brass moments...I think it’s the string playing that impressed me most. Their sound is always remarkable, not least in the Sixth Symphony, where the very opening allows them to show off their enormous dynamic range...Even if you already own Vänskä’s earlier cycle with the Lahti Symphony Orchestra, I think that these new performances are simply unmissable. An outstanding achievement in every way.

With these recordings, Vanska confirms his status as our greatest living Sibelian. Irreplaceable.

The playing is polished and detailed, now springy and buoyant, now occluded and chilling. Tempi are slightly broad but convincingly so. From the plunging energy of the opening of the Third Symphony to the bleak, raw ending of the Seventh, this is a gripping listen.

Vänska crowns his second Sibelius cycle with gripping renditions of the third and last two symphonies.