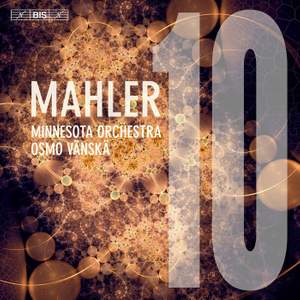 Vänskä sees to it that his ever-waxing Minnesota Orchestra is ideally engaged with the various heights and depths...Limpid and lurid woodwind playing shines out, from the ghoulish clarinets in... — BBC Music Magazine, April 2021, 4 out of 5 stars (Performance) / 5 out of 5 stars (Recording) More…

Left unfinished at the death of the composer, Gustav Mahler's Tenth Symphony has exerted an enormous fascination on musicologists as well as musicians – a kind of Holy Grail of 20th-century music. Recognized as an intensely personal work, it was initially consigned to respectful oblivion, but over the years, Alma Mahler, the composer’s widow, released more and more of Mahler’s sketches for publication, and gradually it became clear that he had in fact bequeathed an entire five-movement symphony in short score (i.e. written on three or four staves). Of this, nearly half had reached the stage of a draft orchestration, while the rest contained indications of the intended instrumentation. Over the years a number of different completions or performing versions of ‘the Tenth’ have seen the light of day. One of the most often performed and recorded of these is that by Deryck Cooke. Cooke himself insisted that his edition was not a ‘completion’ of the work, but rather a functional presentation of the materials as Mahler left them. Cooke’s performing version of the symphony is the one that Osmo Vanska has chosen to use for the seventh installment in his and the Minnesota Orchestra’s Mahler series, a cycle characterized by an unusual transparency and clarity of sound as well as musical conception.

Vänskä sees to it that his ever-waxing Minnesota Orchestra is ideally engaged with the various heights and depths...Limpid and lurid woodwind playing shines out, from the ghoulish clarinets in the outer movements to the purest of flute solos in the late return to life.

Throughout the performance, Vänskä’s penchant for extremes at the quiet end of the dynamic spectrum is evident: The music, for instance, flirts with inaudibility just before the first movement’s cataclysm, just as it does before the end of the fourth movement...a controversial reading of a still-controversial symphony.

This is Mahler without neurosis, disinclined to let rip until unavoidable, clear-sighted and dry-eyed.

This is easily the high point of the series so far...it's immediately clear that one of the huge strengths of this performance is the range of dynamics on offer…Sometimes a recording just does everything that you want it to, and this is most certainly the case here with this fervent and deeply emotional recording of Mahler's tragically unfinished final opus.

It’s arguably the finest instalment of this continuing project so far...one of the finest Mahler 10s on disc…The Minnesota Orchestra plays magnificently, and Vänskä’s meticulous attention to instrumental detail and to the weighting of every chord, and his unswerving sense of symphonic coherence and continuity, make the total effect overwhelming.