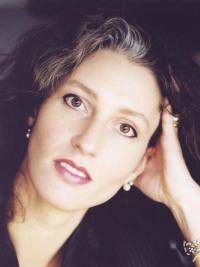 German-Greek mezzo Stella Doufexis was born in Frankfurt in 1968 and trained in Berlin, beginning her career as an ensemble-member at the Theater der Stadt Heidelberg in the mid-1990s; her repertoire encompassed Octavian, Dorabella, Cherubino, Nicklausse/Muse in Les contes d’Hoffmann, and Meg Page (which she recorded for Claudio Abbado on Deutsche Grammophon in 2000). Doufexis’s discography also includes Les nuits d’été with the Deutsche Staatsphilharmonie Rheinland, Rossini’s Soirées musicales with Miah Persson, Bruce Ford and Roger Vignoles, an award-winning recording of Stravinsky’s Requiem Canticles with Michael Gielen and the WDR Sinfonieorchester Köln, and contributions to Graham Johnson’s landmark Schumann lieder series on Hyperion.

Doufexis died of cancer in 2015, aged just 49. She is survived by her husband, the composer and conductor Christian Jost, whose Hamlet Echoes she recorded in 2011.

Find out more at https://en.wikipedia.org/wiki/Stella_Doufexis