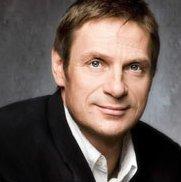 British baritone Simon Keenlyside was born in London in 1959 into a musical family; both his father and maternal grandfather were professional violinists. He began singing as a chorister at St John’s College Cambridge, going on to read zoology there whilst holding a choral scholarship, and then taking postgraduate studies in singing at the Royal Northern College of Music and the Salzburg Mozarteum. He made his professional debut in Hamburg in 1988 (as Mozart’s Count Almaviva, which would become a signature-role) and soon after signed a contract with Scottish Opera; by the mid-1990s he had appeared at most of the world’s major opera-houses in roles including Papageno, Guglielmo, Rossini’s Figaro, Marcello, and the title-role in Billy Budd (which he recorded for Richard Hickox on Chandos in 1999; The Penguin Guide observed that ‘Keenlyside as Billy gains over all rivals in the fresh, youthful incisiveness of the voice’). In 2004 he created the role of Prospero in Thomas Adès’s The Tempest (‘Keenlyside mixes brain and baritonal brawn’ – Gramophone), and the following year sang Winston Smith in the premiere of Lorin Maazel’s 1984.

Keenlyside began to move into heavier repertoire from his mid-40s onwards, including the title-roles in Verdi’s Macbeth and Rigoletto, Posa in Don Carlo, and Golaud in Debussy’s Pélleas et Mélisande. His large discography includes Count Almaviva on René Jacobs’s award-winning 2004 recording of Le nozze di Figaro, and the title-role in Mendelssohn’s Elijah for Paul McCreesh on Signum (‘an Elijah of spirit and intelligence’ – BBC Music Magazine).

Find out more at https://en.wikipedia.org/wiki/Simon_Keenlyside