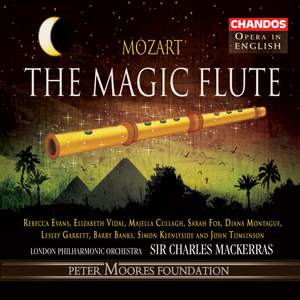 Of all repertoire operas, none gains more than The Magic Flute from performance in the language of the audience. Musically, the performance is hard to fault. Articulation is light and buoyant,... — BBC Music Magazine, June 2005, More…

Act I: Have mercy, have mercy (Tamino, Three Ladies)

Act I: I'm sure that there could never be (Papageno, Tamino, Three Ladies)

Act I: Such loveliness beyond compare (Tamino, Three Ladies)

Act I: Don't be afraid, now hear my song (Queen of the Night, Tamino)

Act I: A man in search of truth and beauty (Pamina, Papageno)

Act I: If you can strive to be a man (Three Boys, Tamino)

Act I: These words of wisdom reassure me (Tamino, Speaker)

Act I: How soft, how strong your magic sound (Tamino)

Act I: Walk on tip-toe, not a sound (Pamina, Papageno, Monostatos, Chorus)

Act I: We worship Sarastro, we bow before him! (Chorus, Papageno, Pamina)

Act I: Sir, I was disobedient (Pamina, Sarastro)

Act I: Our Lord Sarastro will decide (Pamina, Sarastro)

Act II: Dialogue: Where do you think we are? (Tamino, Papageno, First Priest, Second Priest)

Act II: Why, why, why are you in this place of fear? (Three Ladies, Papageno, Tamino, First Priest, Second Priest)

Act II: Dialogue: There she is, the blushing violet - All the world is always lusting (Monostatos, Queen of the Night, Pamina)

Act II: The wrath of hell is burning in my bosom (Queen of the Night, Pamina, Monostatos, Sarastro)

Act II: We worship at the altar (Sarastro)

Act II: Will I not see my love again? (Pamina, Sarastro, Tamino)

Act II: If only I could meet her (Papageno, Old Woman, Second Priest, Papagena)

Act II: Are you the man I love the best (Pamina, Three Boys)

Act II: The fiery furnace could not harm us (Pamina, Tamino, Attendants, Priests)

Act II: We must be very, very quiet! (Monostatos, Queen of the Night, Three Ladies)

Of all repertoire operas, none gains more than The Magic Flute from performance in the language of the audience. Musically, the performance is hard to fault. Articulation is light and buoyant, tempos mobile yet never driven or inflexible, textures sharp and transparent. Rebecca Evans, a richer-toned Pamina than usual, movingly portrays her development from ingénue to woman 'worthy to attain the light'. ...Simon Keenlyside is a marvellous Papageno, innocent, vulnerable and funny without clownishness. Barry Banks... sings a positive, un-wimpish Tamino. With his rugged, rolling bass John Tomlinson creates a formidably imposing yet humane Sarastro, while Elizabeth Vidal atones for some cloudy diction with fiery, bang in-tune performances of the Queen of the Night's arias. ...this new performance, beautifully recorded, with a modicum of well-judged sound effects, catches the work's fairytale wonder, solemnity and fun as fully and delightfully as any, irrespective of language.

No work makes better sense in the vernacular than Mozart's concluding masterpiece. The composer and, assuredly, Schikaneder would have approved of giving the work in the language of the listeners, and when you have to hand such a witty, well-worded translation as that of Jeremy Sams, it makes even better sense. Sir Charles Mackerras has always been an advocate of opera in English when the circumstances are right.
As ever, he proves himself a loving and perceptive Mozartian. Throughout he wonderfully contrasts the warmth and sensuousness of the music for the good characters with the fire and fury of the baddies, and he persuades the LPO to play with a lightness and promptness that's wholly enchanting, quite the equal of most bands on the other available versions.
In no way is his interpretation here inferior to his German one on Telarc; indeed, in the central roles of Tamino and Pamina the casting for Chandos is an improvement, and Keenlyside is fully the equal of Thomas Allen on the Telarc set. Keenlyside's loveable, slightly sad, very human and perfectly sung Papageno is at the centre of things. Rebecca Evans's voice has taken on a new richness without losing any of its focus or delicacy of utterance. Everything she does has sincerity and poise, although her diction might, with advantage, be clearer.
The recording is fine apart from an over-use of thunder and lightning as sound effects. Anyone wanting the work in English needn't hesitate to acquire this set, the first-ever on CD.