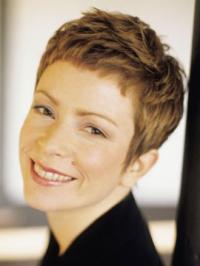 Christine Schäfer was born in Frankfurt in 1965 and studied in Berlin, where her teachers included Dietrich Fischer-Dieskau. She began her career as an ensemble member at the Tiroler Landestheater in Innsbruck, and came to international prominence after singing the title-role in Berg’s Lulu at the 1995 Salzburg Festival (her account of the role at Glyndebourne the following year was captured on DVD and won the Video category at the 1997 Gramophone Awards). Schäfer’s wide repertoire includes Bach cantatas, numerous Mozart roles (including Servilia, Konstanze, Cherubino and Pamina), Violetta in La traviata, and twentieth-century works such as Boulez’s Pli selon pli and Schoenberg’s Pierrot Lunaire and Herzgewächse; her discography includes one of the few female-voice recordings of Schubert’s Winterreise, Konstanze on William Christie’s recording of Mozart’s Die Entführung, and the title-role in Christoph Loy’s staging of Handel’s Theodora from the 2009 Salzburg Festival.